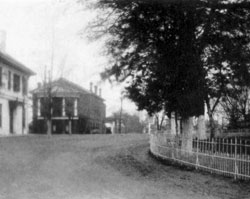 Barnwell County was formed in 1785 when four counties were created out of the Old Orangeburg District. Known as Winton for its first six years, it was to include the area between the Savannah River and the North Fork of the Edisto. The territory was decreased later when parts were used in the formation of three other counties: Aiken, Allendale and Bamberg.

Court was held in the home of Benjamin Odom before the building of the Court House in 1800. It was in 1800 that Barnwell became known as Barnwell C. H. for mailing purposes.

The Sundial, located near the Court House, has been a distinguishing landmark of Barnwell since its erection in 1858. It was a gift of J.D. Allen, at that time a state senator, who is also buried in Barnwell. It is the only remaining one of its kind in the country, and keeps almost perfect time.

The tranquil town of Barnwell was devastated by the War between the States. Hugh Judson of Kilpatrick, a Union general, made waste of Barnwell by burning most public buildings and businesses. Some of the homes, however, remain. At least a dozen houses have been identified as pre-Civil Was houses. None of the town church buildings burned and four of these buildings stand today: Bethlehem Baptist (formerly Barnwell Baptist Church), The Church of the Holy Apostles, the old Presbyterian Church (now Circle Theatre), and St. Andrews Catholic Church. Barnwell slowly recovered from the destructive war.

For many years Barnwell has given outstanding leadership to the government of South Carolina. Barnwell has provided the State with a Governor, Speaker of the House of Representatives, and the Chairman of the Senate Finance Committee. At one time all three served simultaneously and were known as the Barnwell Ring, making reference to the enormous power that resided in Barnwell. The designated historical markers and information on the Barnwell Ring has been placed in Collins Park on Main Street.

Farming continued as a primary means of livelihood for many years. The primary crops included cotton, corn, grain, asparagus, watermelons and cantaloupes. Industry was slow coming to Barnwell. The Savannah River Site, which took a large portion of the county, brought prosperity to Barnwell in the early 1950's. The sleepy little town tripled its size in one year during the construction stage of the Site. Many of the new residents remained following the construction phase and have made outstanding citizens. In recent years other industries have come to the area.

The intriguing history, abundant recreation, good schools, unique shopping and pleasant climate make Barnwell an idyllic place for year-round living and a delightful experience for the visitor who spends time in this Gateway to the Low Country.